The Mock Delivers When We Least Expect...Again

A quick look at various Levels of Tardiness: TV repairman waiting purgatory; 2 week overdue library books; one aunt's Christmas present that dependably arrives in March.  Then there's We Is ND's acknowledgement of the fishes and loaves season unfolding before our disbelieving eyes.

Mea culpa on joining the praise party late.  Plenty of thoughts to unload on the eve of ND's first postseason game.  Apologies if I veer off topic in a few spots.

Preseason expectations were so below sea level that rallying to produce our annual roundtable preview in November seemed futile.  Abro's season ending injury after Game 6 (his 2nd game in uniform, thanks to a No Clue About Anything imposed suspension) all but anchored this 2011-2012 campaign to a dismal fate at the bottom of the BEast.

A small, yet vocal, part of me envisioned the bottom falling out and The Mock not surviving the fallout from a 13-19 train wreck of a season.  It wouldn't have been the first time Brey's tenure was called into question on these pages: Exhibit A & Exhibit B.  Maybe he'd lose control of the locker room amidst the noxious stench of losses piling up like soiled boxers in the corner of the Joyce Center.  Maybe he'd respectfully step aside and let someone else (Martin Ingelsby?) perform program triage.  Suffice it to say, my misplaced rumblings to oust The Mock blew up in my face.

Alright, where's Doug's petition to name the court after Michael Montgomery Brey?  I'm finally ready to sign.  (Sadly, the petition page and all of its signatories have been sucked into a cyberworld vortex of no return.  If the petition resurrects itself this Lenten season, I'll gladly throw my support behind it, even if Muffett McGraw has a few lengths lead on earning said naming rights).

As the team prepares to tip off in MSG versus fellow surprise Big East story, South Florida, it's worth taking a closer look at how the Irish got here.  To say crashing the Big Dance this year was a long shot is an insult to the term understatement.  The improbable odds of Notre Dame finishing 3rd in the toughest conference in America and already stamping their ticket on Selection Sunday are mind-blowing.  About the same odds of this shot finding nylon.  Or this shot - I can't decide.

Let's wrap our head around this season timeline:

4-0 vs. the Brey Non-Conference Pu-Pu Platter (198 avg. RPI): Very little litmus test of any sort, though Detroit ended up winning the Horizon League tournament bid.  Otherwise, an accumulation of wins with little merit playing with the team's best shooter in street clothes.

0-2 vs. Thanksgiving Tournament opponents: Missouri makes a big statement that they've backed up since; The best win for a mediocre Georgia; Abro tears his ACL in practice after these games and is reduced to street clothes on the bench for the rest of the season.

4-3 vs. the Abro Aftermath Adjustment stretch of games where the team learns new roles and Brey juggles lineups with the desperation of a street performer looking for his next meal. 4 wins vs. 297 avg. RPI (mind you, there are only 344 teams...this is the dregs of Division I); 3 losses vs. name brand teams with a 48 avg. RPI.  Overwhelmed by Gonzaga in Spokane; a tantalizing winnable game only to go sour against a rebuilding Maryland; and a worse than the score indicated in-state clash with a let-down-waiting-to-happen Hoosiers fresh off their win heard round the world vs. Kentucky...the letdown didn't happen.

Christmas brought an 8-5 team about to enter a brutal opening conference salvo with 4 ranked teams looming (Pitt, Louisville, UConn & Cuse) in the first 7 contests.  Thus far, not a single win to hang their hat on as a building block for success.  Squeaking by Detroit at home was the best RPI win at 135, while breaking the century mark in the last game before the holiday break was a welcome sight.  The Burn Offense looking spontaneously combustible.

If the Irish emerged as a .500 team after the Syracuse game, most fans probably would've taken it.  With a backloaded conference slate of weak teams, the NIT looked like an optimistic landing spot.  The opportunity to play another home game or two and give this young team a few extra games of postseason experience sounded reasonable.

3-3 Pre-Syracuse game, first 1/3 of conference schedule.  The Irish welcomed a reeling Pitt team who had just lost on their home court to Wagner.  Little did anyone know at the time that Jamie Dixon's squad were impostors this season.  But knocking off the Panthers was a refreshing jolt nonetheless.  Back to reality with a spanking on the road at Cincy, followed by the first shock of the season, a double OT nail biter in Freedom Hall.  The Irish dictated the flow with the Burn and, for the first time, gave fans a wild thought that Brey found a magic lamp on one of his Middle East desert trips and was using all three wishes this season.  Beating South Florida at home didn't seem like a good win at the time.  That was one of the few W's confidently circled on the schedule to start.  Following it up with a stinker vs. Connecticut and an even worse loss on the road to Rutgers had everyone reaching for the panic button again.  And then #1 visited South Bend... 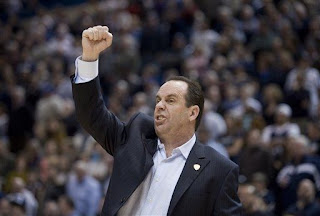 9-0 Post court rushing mayhem and subsequent record-tying conference win streak.  It's still weird to look at Syracuse sitting at #2 in the polls with one tally in the loss column.  How in the name of Todd Palmer did that happen?  Shooting the lights out with your opponent's best defender out of the lineup makes for a memorable "were you there when" story.  Team confidence soared and the wins avalanched in every shape and size, as if Dr. Seuss were writing the year-in-review.  Road wins, home wins.  Crazy come from behind wins (Nova), equally crazy grab an early lead and never look back wins (Marq).  Freshman making a name for themselves wins (Naughty Time!) and previously unheralded players stepping into the spotlight and relishing the moment wins (Jerian Grant & Jack Cooley). By the end of the streak, Notre Dame was ranked and slotted comfortably in any bracket magic 8-ball exercise.  A glorious run that saw The Mock go multiple personality on us as he introduced (and continued for good luck) The Don, as well as the streak-busting The Bow. 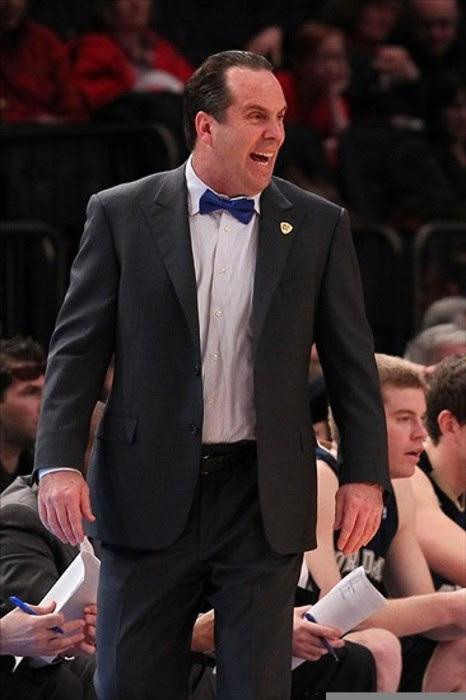 1-2 All good things come to an end ending.  For whatever quixotic reason, Madison Square Garden has plagued Irish shooters for years on end, and a putrid day behind the arc halted the winning streak before it reached double figures.  As bad as they played vs. St. John's, the Irish still had a shot at the buzzer to tie.  Things were not as hopeful on their Hoya visit and the better team triumphed.  Thankfully, the boys saved one last shooting display to beat Providence and secure a double bye in the BET (and inadvertently score the easiest possible quarterfinal matchup vs. #6 seed South Florida).

Add it all up and The Mock delivered a 21-10 campaign with 6 wins over top 50 RPI teams and a couple signature victories to tell the grandchildren, doing so with the team's returning leading scorer and best shooter playing in 2 games.  This year more than any, Mike Brey soared past everyone's expectations, figuring out a rotation with 3 new chief contributors (Grant, Connaughton and Dragicevich) and changing the team's offensive mindset on the fly with an emphasis on post production from the criminally underrated Jack Cooley.  For all his flaws (which I'll delve into in a follow-up post), it's hard to argue with the results of the self-described "loosest coach in America."

Come Thursday night, we'll see if the team can conquer their fear of MSG's rims, as well as what fashion choice Brey opts for to extend this unlikeliest of feel-good seasons.
Posted by Jimmy at 12:27 AM 1 comment: