Irish Madness - The Quest for the Most Memorable ND Football Game

It's been more than 4 months since ND played for the National Championship.  The Blue-Gold game is now in our rearview mirror.  To keep ND football in the forefront and piggyback on the glow of the magical 2012 season, we've created an entertaining experiment: a 4-region bracket tournament that decides once, and until the next time someone does this, The Most Memorable Game in Notre Dame Football History*

Of course we'll hang an asterisk on this endeavor from the get-go.  Since very few, if anyone who may actually read this, have first-hand memories of the Rockne and Leahy dynasties, we limited the pool of entrants to the last 5 decades of ND football.  So 1960 is the first year our selection committee considered.  To equitably fill the bracket, each decade received 13 games each, with 3 wildcard selections rounding out a full 68-game bracket. 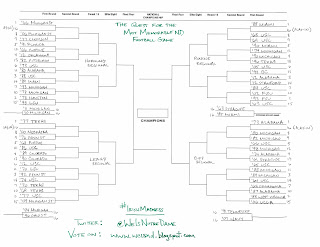 Fittingly, the four #1 seed games represent the last four championship seasons of 1966, 1973, 1977 and 1988.  Since "Memorable" doesn't discriminate between victory and defeat (though certainly we remember more fondly the wins), 19 Irish losses litter the bracket, some even "favorites" in early rounds, according to seed.  Did some memorable games not make the cut?  Of course.  Not surprisingly, the "snubs" were mainly games of recent vintage, many of which were stinging losses of varying pain thresholds.  But we feel confident the selection committee chose the most appropriate games for the bracket.  For giggles, we'll even post a "snub" list of the top 25 snubbed games for them to stew about in their media guides.

As you can see on the right side of the page, there are multiple polls of matchups, the first of which are the four play-in matchups pitting all #16 seeds striving for sacrificial lamb status in the main draw.  As the bracket progresses, we'll keep updating the voting windows with new matchups and welcome you back often to continue casting your deciding vote on the games you think are the most memorable.  What makes memorable you ask?  All in the eye of the beholder.

There's "memorable" for all the right reasons, like the '92 Snow Bowl with its unforgettable images, and there's "memorable" for all the wrong reasons, like Navy ending their ignominious losing streak in 2007.  This bracket brings you games of all kinds: heavyweight bowl game showdowns, top 10 rivalry grudge matches, riveting comebacks, equally riveting comebacks that fall just short, plays that take your breath away, drama that unfolds in waves, challenges for the #1 throne, with more than a couple #1 vs. #2 armageddon-type stakes.

These games are the reason you meet Shawn Wooden backstage at an Umphrey's McGee show and instead of saying "A pleasure to meet you, I enjoyed watching you play" you shout "Bat it down! Batted down!"  And he relishes every second of the encounter that detours down memory lane...at least I think he did.

So enjoy this experiment and the blasts from the past, both near and far.  Please carry on any and all arguments/cheers of support in the comments section of each matchup breakdown and on Twitter: @WeIsNotreDame #IrishMadness