In case you're just joining us, here's a brief introduction to bring you up to speed, complete with the full bracket, followed up with the #16 seed play-in matchup breakdowns that were voted on last week.*  We now roll into the opening four Round 1 matchups.  Since we made the difficult (but necessary for actual remembrance sake) choice to preclude the pre-60's games, a different ND star of yore title-sponsors each sub-regional.  Last thing we want to do is dismiss the players this proud program was built on.  That said, we've got some matchups to break down.

*Dealing with some technical difficulties regarding the final vote tallies.  My unscientific diagnosis is a website "cookies" issue as I can't find a computer that has the final results - they all show only 5 votes.  At one point in the voting frenzy, I know there were double digits votes entered.  Working on a solution.  For the time being, I'm going with the presumptive winners, though none should matter once they face a #1 seed.

Play-in round winner of the UM Nightmare Finish showdown, Denard & the Gang's "prize" is a match with one of the most legendary Game of the Centuries in college football history, the 1966 classic at Spartan Stadium.  There's plenty to say about this game, but pretty sure the flowery praise can wait at least another round.  No #1 seed has lost in March Madness, and I don't think a #1 seed will be losing in Irish Madness.

There's scant Googleable info recounting ND's first ever trip to Death Valley the Lesser (is there an unspoken understanding in the South that differentiates between LSU's Death Valley and Clemson's Death Valley?  Phil, I assume you know this or can readily find out).  Talent abounded on both rosters as 36 players from this game ended up playing in the NFL.  Joe Montana did Joe Montana things, erasing a 10-point 4th quarter deficit to eek out victory and preserve the team's title aspirations.

Fast forward to 2006 and Charlie Weis' squad is licking their wounds after an embarrassing home loss to Michigan.  Sparty Stadium is never fun to play in, especially night games with a driving rain storm staring down a 21-37 4th quarter drubbing and long bus ride home.  That's when Leprechaun magic created one of the more riveting comebacks in recent memory.

Only one of these victories prompted the losing side to invoke Teddy Ruxbin, H.R. Pufnstuf and applesauce as coping mechanisms (there's even a bonus Valenti rant - "The whole country's laughing at us!").  The greatest radio meltdown of all time comes close to trumping the memorable game itself.

The last game of the ’91 season steps into the ring against the first game of the championship ’66 season.  First, some words on the throwback game. 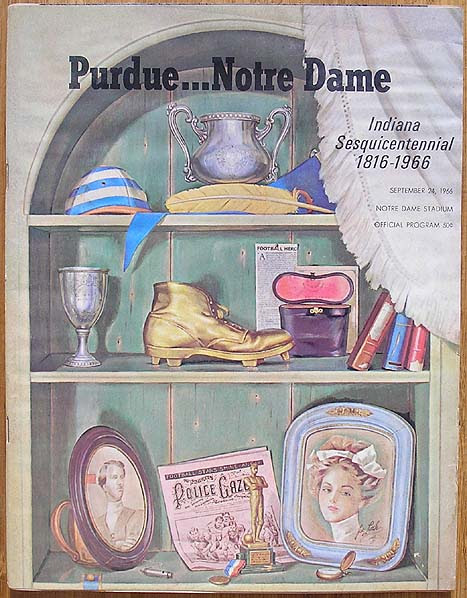 Those of us born in the 80’s and beyond attribute only fleeting success for the Purdue program during Joe Tiller’s heyday.  But back in the 60’s, Purdue was a perennial force to be reckoned with.  Yes, I wrote that sentence with a straight face.  It’s true.

Short Tangent #1: The Jack Mollenkopf (how does any recruit not answer the phone when JACK MOLLENKOPF is on the line?) Era witnessed the longest tenured coach in the school’s 123-year program, as well as the winningest coach (84 wins is Darren Hazell’s target number for West Lafayette immortality…not the greatest city to never have to pay for a beer).  In the decade of the 60’s alone, Mollenkipf’s teams went 65-28-3 for a sterling .677 winning percentage, including 6 seasons of AP top 20 year-end ranks.  The Boilermakers produced 14 All-Americans during the decade and finished 3rd place or higher six times in the Big Ten standings.  A guy by the name of Bob Griese started wearing the black and gold in 1964.  As a junior the following year, Griese led Purdue to a 7-2-1 mark, the most wins in a season since 1945.  He’d go on to finish 8th in the Heisman voting in 1965.  Purdue went 9-2 in 1966 to cap off Griese’s career, beating USC in the Rose Bowl, the program’s first ever bowl game. Steve Spurrier edged Griese for the Heisman, a “bridesmaid trend” over the next few years as Purdue RB Leroy Keyes finished 3rd (1967) and 2nd (1968 – OJ Simpson winner) and QB Mike Phipps finished 2nd (1969).  Hold up, let me get this straight - - 3 different Purdue players in 4 years finished runner-up as the most outstanding player in the country?!  What was in the West Lafayette water?  Along with these great individual accomplishments, the team went 8-2 in 3 consecutive seasons to close out the decade, earning Big Ten co-champs in 1967.  Quite an impressive run that virtually nobody outside the state of Indiana knows about.

There was nothing short about that tangent, but don’t you feel the slightest more educated about ND’s longtime, soon-to-not-be-scheduled rival?  If whatever the go-to blog for Purdue football doesn't link to this post, they're doing their program a disservice.  You're welcome Boilermaker Nation.

Bringing the discussion back to Irish relevance, Purdue dominated the decade against its in-state northern rival, winning 7 out of 10 games, including 4 times in Ara’s first 6 seasons.  From 1965-1968, ND and PU were both ranked in the top 10 for their annual early season square off.  The ’66 contest found the Irish seeking revenge [Video Highlights] following the 1965 game in which #1 ND traveled to Purdue and lost by 4.  (Short tangent #2: The Boilermakers have beaten the #1 team in the country 7 times!  Only ND and Oklahoma have more top-ranked takedowns).  The 14 points allowed by the ND defense in this opener would be the most given up all season, with the MSU tie being the only other double-digit surrender.

A lot of words for a memorable game that’s likely to get steamrolled in the vote by a bowl game of recent vintage. The ’91 Sugar Bowl (yes, technically in 1992, but it was the ’91 season) redeemed a late season tailspin of the Tennessee collapse and a no-show in Happy Valley against a top 10 Penn State team.  Nobody gave the Irish a chance in New Orleans [LA Times game preview], and things didn't exactly start well [Video Highlights] as the Gators jumped to an early 13-0 lead in the 2nd quarter.  Thankfully, Florida repeatedly shot themselves in the foot, settling for field goals and Shane Matthews lobbing inexplicable interceptions in the end zone.  But the Irish offense couldn't get anything going, totaling 34 1st half yards on the ground.  Being the butt of every bowl game joke and doing nothing about it was all the motivation Holtz needed at half time.  That and turning The Bus loose on the worn-down Gators. The final 30 minutes belonged to the away jerseyed Irish, who incorporated green numbers for added motivation.  As the players carried Holtz off the field in triumph, the doubters were silenced.  And yes, for historical perspective, this game marks the last time Notre Dame bested the SEC champs. 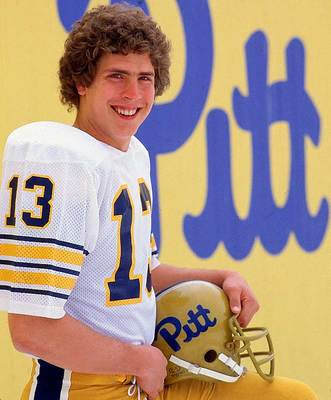 Two tremendous Irish road victories waging battle in this 1st round.  Gerry Faust’s unranked squad delivered a surprising performance on the road against Dan Marino, upsetting the #1 Panthers [Video Highlights].  Marino should have just started making Isotoner commercials in the post-game presser and spared himself the career underachiever label that was to come.

At the beginning of the 4th, down 13-10, Coach Faust dialed up a daring flea-flicker.  For that specific play package, Faust subbed out frosh phenom Allen Pinkett because Pinkett had problems with the pitch in practice.  So in came senior tri-captain Phil Carter to execute the trick play.  The resulting 54-yard TD strike couldn't have been scripted better.  It was QB Blair Kiel (yes, Gunner's uncle) longest completion of the season.  Pitt added a FG to make it 17-16 Irish.  Then, with just over 8:00 minutes to go, the freshman sensation Pinkett showed why he supplanted his senior counterpart with a 76-yard cutback TD run that cemented the upset bid.  Pinkett added an insurance touchdown four minutes later to complete the "rout."

The Irish probably shouldn't have been out of the polls for this one.  Two weeks prior, they stood at 5-0, with two top-20 wins over Michigan and Miami on their resume.  A home loss as time expired to unranked Arizona, followed by a road tie to unranked Oregon prompted voters to drop the 5-1-1 Irish outside the rankings.  The unexpected takedown of Pitt vaulted ND back to #13, to which they responded by losing their last 3 contests.  The mercurial season rationalizes its lower seed here, but beating #1 is always memorable.

Gerry Faust's shining moment has its hands full with quite possibly the crowned jewel game of this past remarkable season.  The Oklahoma showdown in Norman turned out to be the "pinch me" moment for 2012.  Surviving several close calls to Purdue, Michigan, Stanford and BYU were undoubtedly feel good wins, but for a program with championship aspirations, a lightning rod victory was needed.  Emphatically knocking off the Sooners convinced all Irish fans that they could believe a trip to Miami was very real and possible.  If Manti doesn't play like an unadulterated madman, he likely doesn't get invited to New York as a Heisman finalist.  Best of all, BCS dreams were a reality.